The Good, the Bad, and the MI: Redmi 2 Review The Redmi 2 is the much-awaited successor to the pretty solid Redmi 1S. For the price of Php5,999, you get a solid quad-core device with awesome display running on the latest MIUI 6. However, with several connectivity issues, will it still be worth it? Xiaomi knows how to make their budget-friendly products look more expensive than they actually are. The Redmi 2 may be encased in plastic, but that doesn’t diminish its sleekness. The 4.7-inch screen is framed by bezels that slope into its smooth, fingerprint-proof back panel, which has the main camera, its LED flash, and the speaker. On its right side are the power and the volume buttons, while below is micro USB port. Every thing looks classy, from the phone’s form to the simple yet elegant Mi logo at the back. However, I do wish that they backlit the capacitive buttons. Scene from the trailer of “Avengers: Age of Ultron”

Redmi’s 4.7-inch display is really something else. The colors are vibrant and sharp no matter what viewing angle, and it’s really a great plus for those who love watching movies or playing games on their mobile device. Scene from “Ghost in the Shell: Stand Alone Complex” Antutu places the Redmi 2 beneath the Asus ZenFone 5 with a score of 20,459, which isn’t at all bad for its price. I could almost feel its 1.2GHz quad-core processor humming in my hand as I play with the super-sleek MIUI 6 (more on that later). Although at times there’s a split-second lag during heavy multi-tasking (eg. games + video + social media + online browsing), the Redmi 2 proves to be a sufficient gaming platform: it was able to play Injustice: God’s Among Us without any hiccups. Paired with Redmi’s great audio, and you’re all set for an afternoon of clear and seamless entertainment.

The Redmi 2 has an 8MP rear camera with LED flash which performs a great deal better than many other phones at the same price range. Colors are vibrant and images are sharp.

Check out the sample photos below. The rear camera is also very capable of taking shots in low-light environments. W/o flash and w/ flash There is also an array of Instagram-like filters to choose from, so before you take a shot, you might want to check them out.

The front-facing camera isn’t so bad either, even if it only snaps at 2MP. Similar to the rear camera, filters are also available. Here’s where the issues begin. Other reviews have mentioned that the Redmi 2 does not support SMART’s LTE band, but still manages to catch 3G. Unfortunately, the review unit I got seems to have a curious glitch: it goes up to H+, but can’t connect to Google Play or Facebook. There were no problems accessing these apps using a WiFi connection, but once I shift to data, things get a bit frustrating.

What’s interesting is that I can still use Messenger, and even play games that require an Internet connection such as Brave Frontier. So I am not entirely sure if the problem is with the hardware or the software.

That’s for the main SIM. The secondary SIM seems to have a hard time catching signal as well, what with it repeatedly notifying me that it can only be used for emergency calls. I tried both SIMs on my good old Nexus 4, and their signals both worked fine. Redmi 2 is such a nifty phone, and it shouldn’t have these issues.

I just take comfort in the fact that others who have reviewed the Redmi 2 didn’t have the same problems that I did. It’s probably just the this specific unit. Here’s hoping that it was just one bad apple from a basket of relatively good ones. Once I managed to get everything fixed by just using a WiFi connection, I was able to appreciate the fluidity of MIUI 6 over Android 4.4 KitKat. With a beautiful interface, an array of themes to choose from, and a more efficient multitasking function, the MIUI 6 is such a joy to play with. 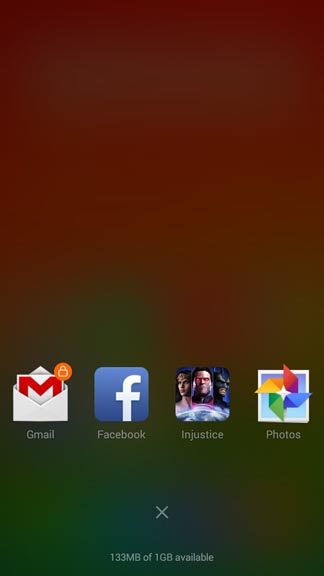 Swipe to the right and access this multi-tasking window to see which apps are currently running.

The MIUI 6’s gallery of themes does away with third party launchers, making it simpler for those graduating from feature phones or first-generation smartphones to customize their devices. Multitasking has also been made easier, since a swipe to the right can pull up all the apps you have recently been running, and a tap can do away with all of them, resulting in a smoother mobile experience. With a design that’s very clean and easy on the eyes, its obvious that Xiaomi’s team had their fans in mind. The MIUI 6 is sleek, functional, and very efficient: it doesn’t waste time on useless bloatware, and its pre-installed apps are actually some that are worth using. One example is its Security Center, which acts as a cache cleaner, a battery monitor, a virus scanner, and a number blocker.

The Redmi’s 2,200mAh battery can last you an entire day of regular usage (calls, texts, data intermittently used), but if you’re a heavy user who’s always online, then it can last you a good five to six hours.

Initially, I had thought that I’d recommend getting a Redmi 1S over the Redmi 2 to those who were thinking of shifting to a Mi device. However, I think the Redmi 2 deserves the benefit of the doubt: maybe I just got a not-so-good unit, since other reviewers didn’t seem to have the same issues as I did. Besides, once I managed to go online and to sync my accounts, the Redmi 2 was a lot of fun.

So would I recommend the Redmi 2? I would, especially to those who don’t obsess much over the difference between a 3G and an LTE data connection. Remember, Xiaomi has a pretty solid costumer care network locally, so if there’s anything wrong with your device, you can trust that they’ll find ways to fix it. Besides, at its price of Php5,999, it’s pretty much a sweet deal.