I’ve been wanting to have an interview with ASUS Global CEO Mr. Jerry Shen since the Asus Zenfone 2 launch in Jakarta, Indonesia last year. I know it was a long shot since media people from Southeast Asia were also there to interview him, so I backed off. When the Zenfone 2 was launched in Manila, Mr. Shen was also there to grace the event. I was a co-host of the livestream event with Jam at that time and I didn’t bother to ask the PR reps for I was already spent for that day.

Prior to the Zenvolution event, I was already informed by Asus Philippines PR that I was one of the chosen few to interview the Visionary CEO. I was delighted by the idea and immediately agreed. I have no inkling why I was included in the “Magic 5” but maybe they liked the idea of how I handled their two livestream events last year. The roundtable interview included Kevin of Yugatech, John and Jamie of Unbox, Iñigo of Interaksyon, Michael Josh of GadgetMatch and myself.

I am posting excerpts of our interview with Mr. Jerry Shen as well as some videos I’ve recorded during our one-hour private session. I hope you guys will like it!

John Nieves: “You will be the first one?”

WOW!!! Mr. Shen has just revealed that they will be the FIRST to use the Qualcomm Snapdragon 821 processor for their Asus ZenFone 3 Deluxe this coming August!

MR. SHEN EXPLAINS THE INVISIBLE ANTENNA AND THE ZENFONE 3 CAMERA

Noticed our “aaaahhhhsss” when Mr. Shen revealed where the invisible antenna is found? He also related his story about the new ZenFone’s camera and how they value safety for its consumers with its Laser Auto-Focus.

Soooo…. Asus will release THREE (3) new ZenFone Max models later this year! I am quite astonished that the ZenFone Max will make up 40% off their ZenFone sales. Maybe the current Max is really doing well.

WHAT ABOUT THE ZENFONE GO, ZENFONE SELFIE? WILL ASUS USE THE “ZENFONE 4 OR ZENFONE 5” NAME AGAIN?

I asked about the ZenFone Go and Mr. Shen confirmed that it will still be a mainstay in their lineup. They know that the ZenFone Go can still appeal entry-level users who aspire to have a ZenFone with limited budget. As you have heard, the Selfie camera can be integrated in the future models, and even though we already had a ZenFone 4 and ZenFone 5, these names will be used again as early as next year.

FROM MOBILE TO ROBOTICS: MR. SHEN TALKS ABOUT THE ZENBO

We shifted the discussion from ZenFones to Zenbo. Mr. Shen is inviting developers for Zenbo, and it’s not limited to Google developers but to developers from other platforms as well.

WILL THERE BE A ZENFONE 3 ZOOM OR ZENFONE 4 ZOOM?

Me: Mr. Shen, I really like the Zoom (Mr. Shen pulls out a ZenFone Zoom from his jacket and shows it to everybody) but you didn’t mention anything about the Zoom within the ZenFone 3 lineup. Would there be one, or would we see one in the ZenFone 4 instead?

ASUS PR: (motioning NO!) Focus on the current products (draws laughter from everyone)

Mr. Shen: Max I can share with you, but other products….

We ended the interview with a couple of group shots including this: And I requested for a photo with the Visionary himself: 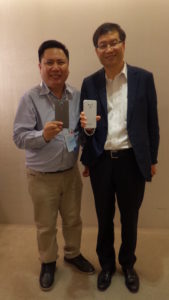 I would like to thank ASUS Philippines and the ASUS Global PR for giving us a chance to interview your Incredible CEO. I certainly hope that we would be given a chance again to interview him in the near future.