We mentioned in previous posts about Cherry Mobile that they have been quiet for the past couple of months and seems to be very focused in their Cherry Mobile Festival which is now on its 6th year. They went to different parts of the Philippines during the festival, not only to conduct events, but to also personally talk to their customers on what they are looking for in today’s smartphones.

This grassroots approach inspired them to produce a new smartphone that is good for imaging, gaming, and entertainment. This smartphone happens to be the latest in the Flare series – the Cherry Mobile Flare X!

Before we continue, check out the specs of the Flare X:

We’ve seen brands from China with these specs being sold here for less than Php 10,000.00, but with these specs from a top local brand like Cherry Mobile and a price that is full of win, the hard-core smartphone users as well as the Flare fanbase may go for the Flare X instead. Almost, but not quite. I’m trying very hard to remember which among the dozens of previous Flare models is similar to the design of the Flare X. I also thought about the Flare HD which we reviewed last year but it isn’t that close either.

Anyway, here’s another hardware comparison with Cherry Mobile’s flagship released earlier this year and one of the best smartphones released at that time, the Cherry Mobile Cosmos One Plus. Again, almost the same in size, but the Cosmos One Plus’s design shows a bit of premium compared to the budget Flare X. 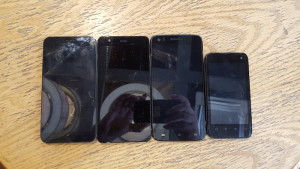 Cherry Mobile Cosmos One Plus, Flare X, Flare XL, and the original Flare

Placing the phone on the table may give a first impression that it isn’t a cheap smartphone at all. It looks quite attractive thanks to its size though you need to polish the back cover to clean those smudges. The specs of the Flare X are almost similar to Cosmos One Plus, but since the former is valued at almost half the price of the latter, can we expect its performance to be at par with the other local and international flagship smartphones? We certainly hope so and we hope to get excellent results during our evaluation. 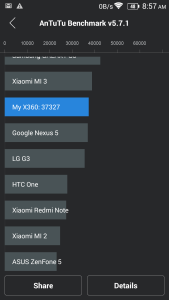 The Antutu Benchmark app shows that the Cherry Mobile Flare X was able to get a score of 37237. The score is pretty good as the older MT6592 processor is usually able to churn out scores around 27000-29000. We’ll post our review of the Cherry Mobile Flare XL and of course the Flare X next week! If you have any questions, message us over on FB or on Twitter.